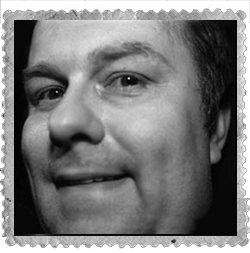 Jon Daniel is the man who looks after Cardiacs when they are away on tour, and, if they are good, when they are resting at home too! He is fond of animals in his own funny way and one day… well, we’ll let Tim tell the story because he was there at the time…!

It’s true! I was there at the time! It was a terrible time. No one was clean. We were all filthy dirty and it wasn’t our fault and it wasn’t fair on anyone except Big Jon bloody Daniel because HE was never out and about like we were spose to always bloody well be, but THAT didn’t stop him not even ONCE! We hung around in the car park for hours and it was freezing bloody cold and no one knew if we were coming or going and my hands were all sticky and while all the shouting was going on no one except me was noticing a small stupid dog that was in the back of someone’s car and it had been left behind and the window was open just enough for it to stick it’s stupid yappy mouth out the top and rap and rap and rap with its tiny teeth all showing.

It was Jon Daniel who drove that animal to despair… and Jon Daniel alone!