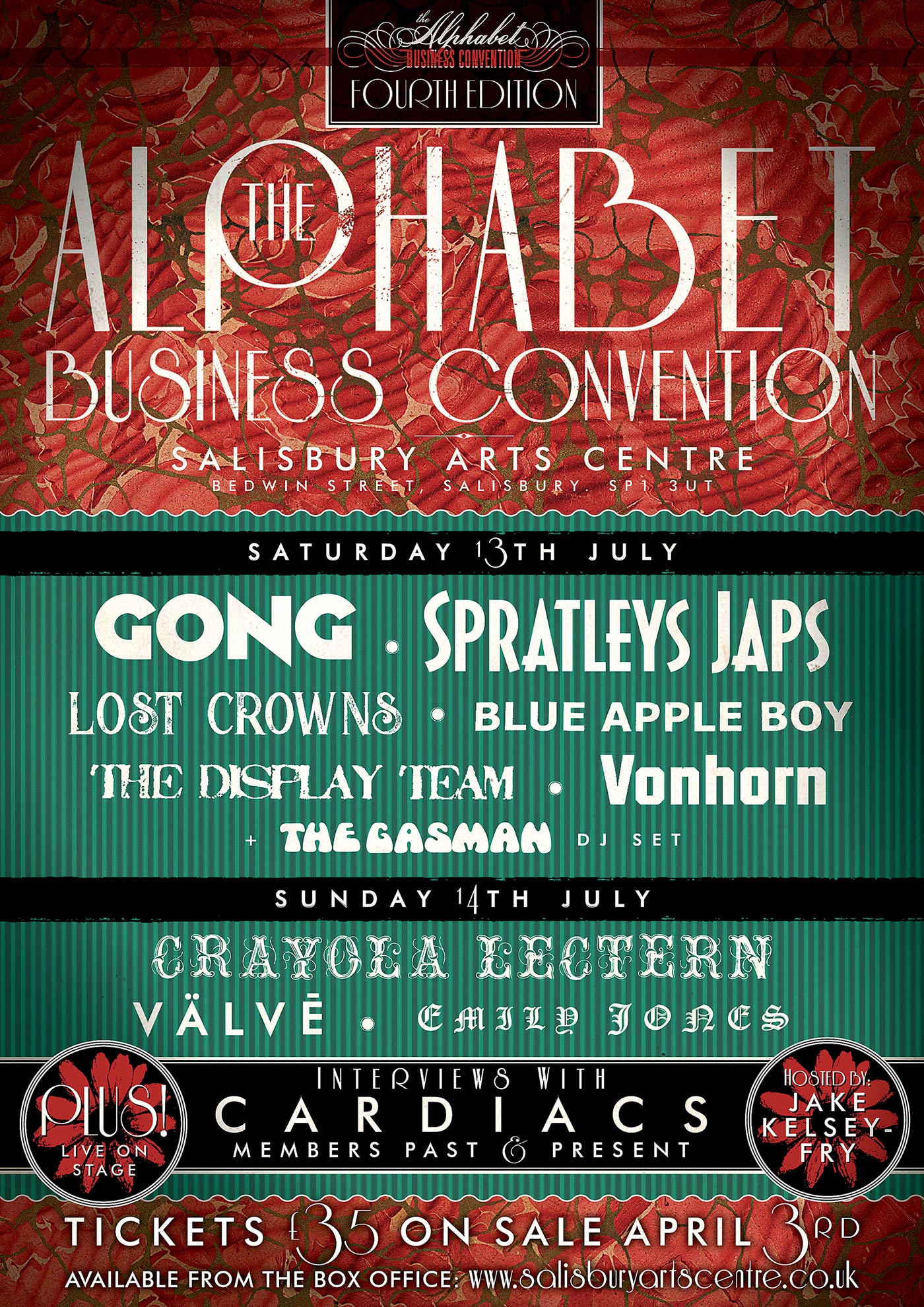 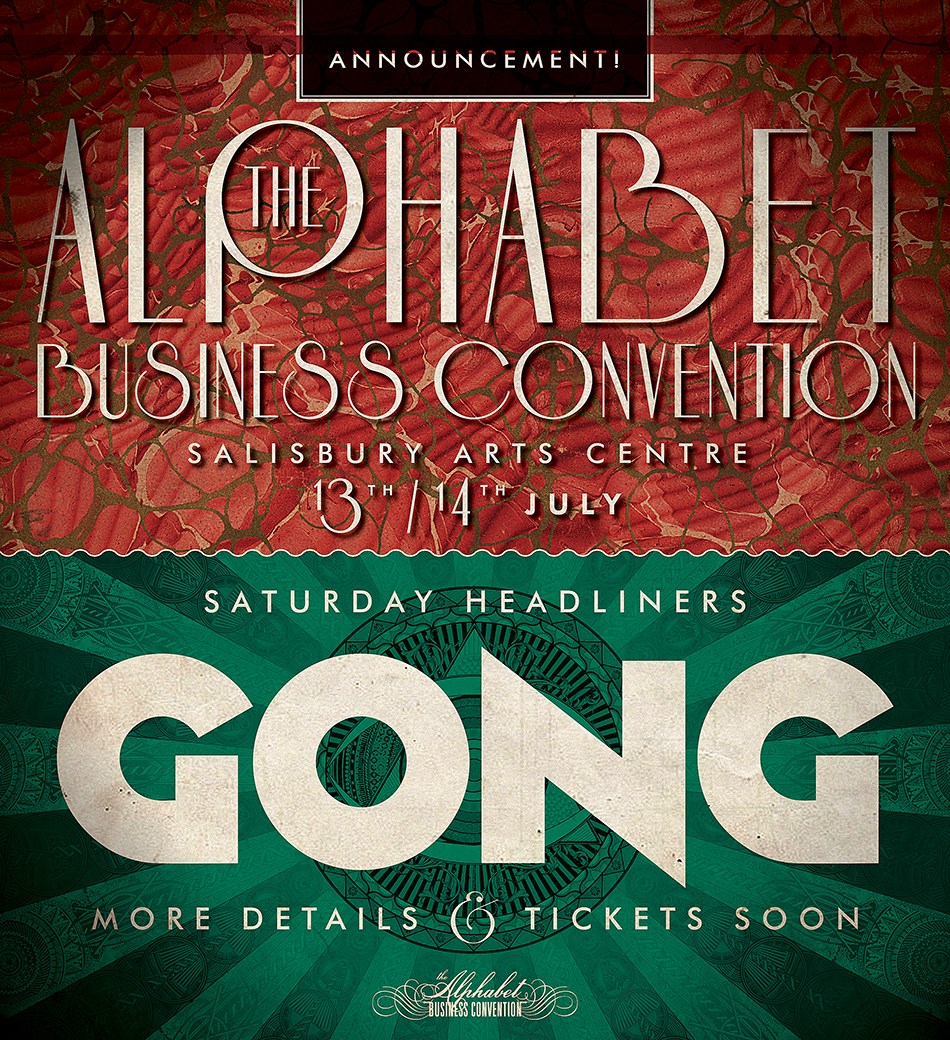 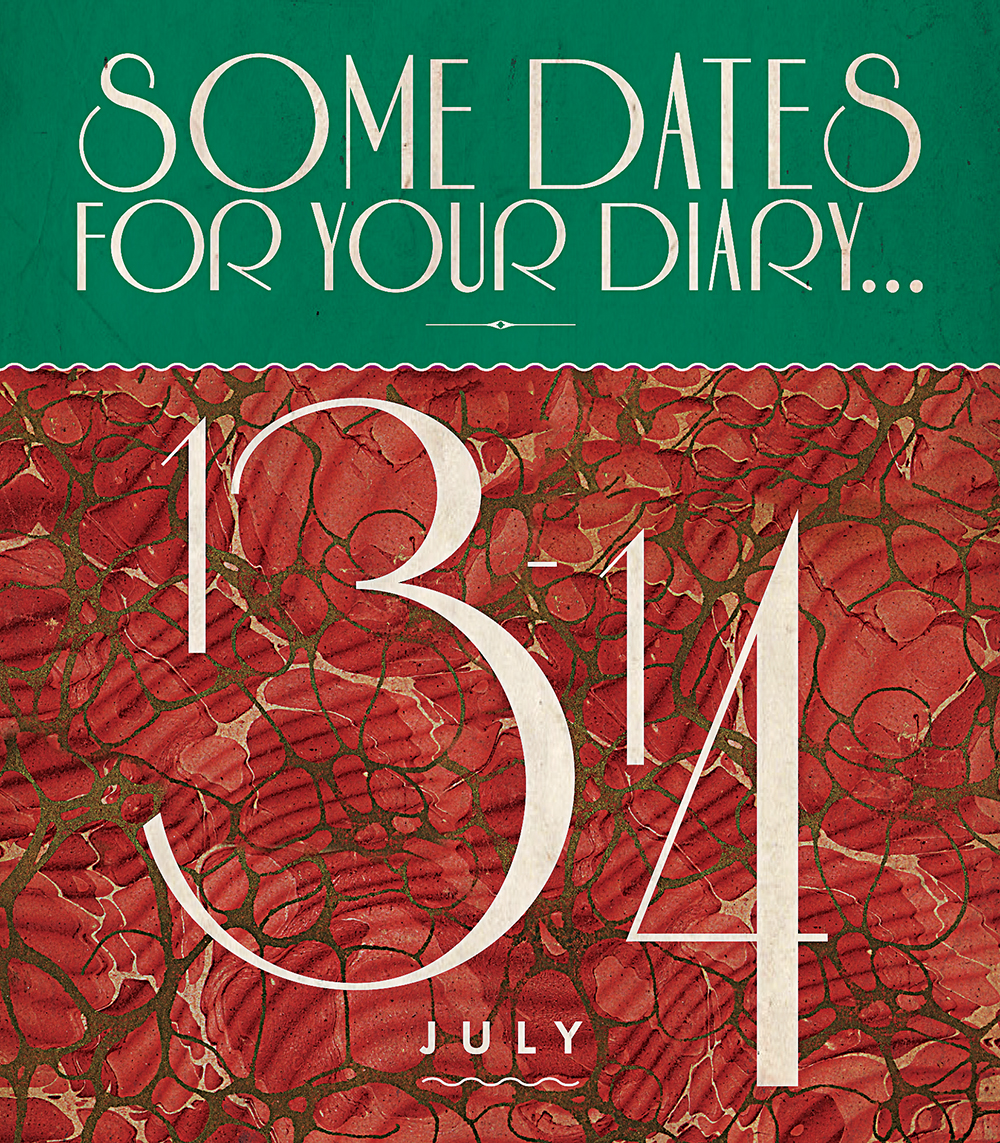 Hello. It is now nigh on nine months since the start of the Just Giving campaign, and perhaps high time for an update on how things have been going for Tim since then.

Unfortunately, at around the time of the launch, Tim became seriously ill, and it has taken him a while to get his strength back. Thankfully though, in the last couple of months his health has improved enough to start his rehabilitation in earnest.

So he now has:

…and his own PA to coordinate things for him.

As well as this, he has a new state-of-the-art touch screen computer, and access to the resources needed to enable him to attend gigs more often.

Tim is at the beginning of what we hope will be an exciting journey for him, and it’s all down to the financial support given, with love, by you.

With love from Mary x

Hello, good people of this world!

It gives me immense pleasure to bring this announcement to YOU! We are all as excited as we are allowed to be here at THE ALPHABET BUSINESS CONCERN.

We hope, for the sake of whatever LORD himself, you can make it. 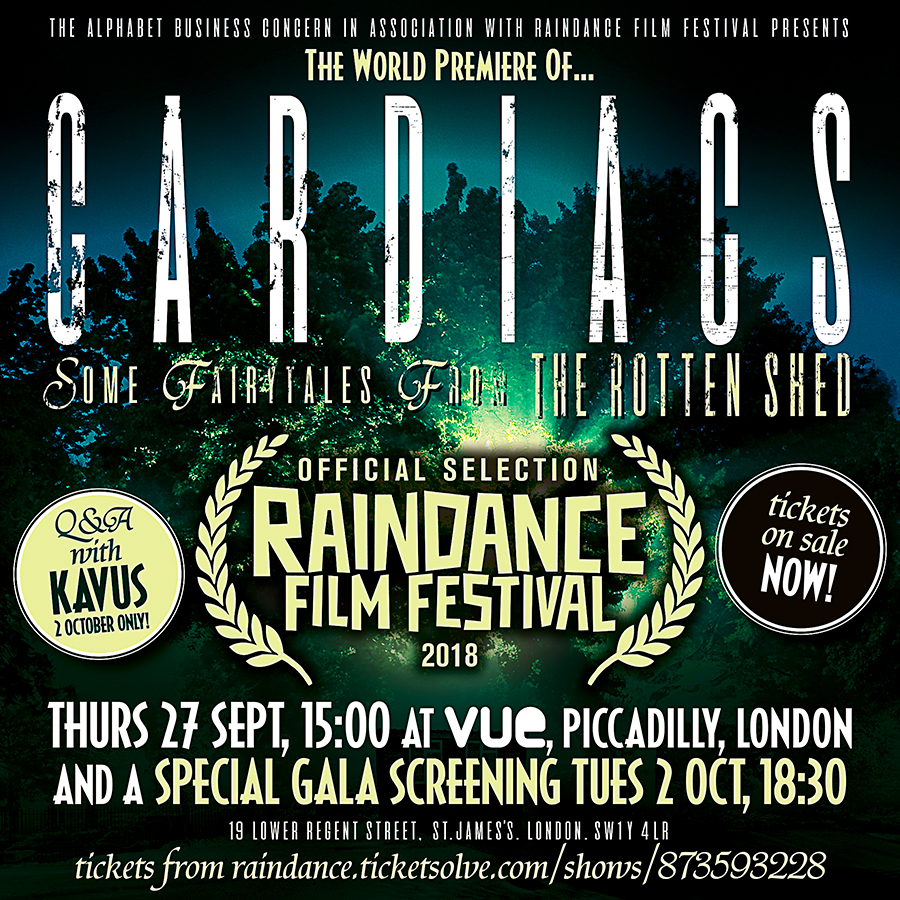 This message is sent as a means of explanation for the non-arrival of stuff you may have ordered from The Consultant’s Memorabilia Collection.

Tim Smith has been in the hospital since last Sunday and I have been part of a team of close friends and family supporting NHS staff to provide the best care possible in a severely overstretched system. He is never without someone to advocate for him or hold his hand from early morning until late at night. This means, however, that it has become almost impossible to send out orders. As soon as there is a moment in my schedule, I will start posting – I promise!

In the meantime, the love that is still pouring in is being transmitted directly to him through any channel deemed efficacious at the time. Sometimes, we just tell him with wormbs.

Please know that your purchases are important to me and will be sent as soon as is humanly possible.

With love and respect,Mary x

It’s back! Pressed from the 1991 master and given a cover and gatefold makeover, here again is the album that gave us our anthem. Sing high! Sing low! Sing to him! Love Mary x 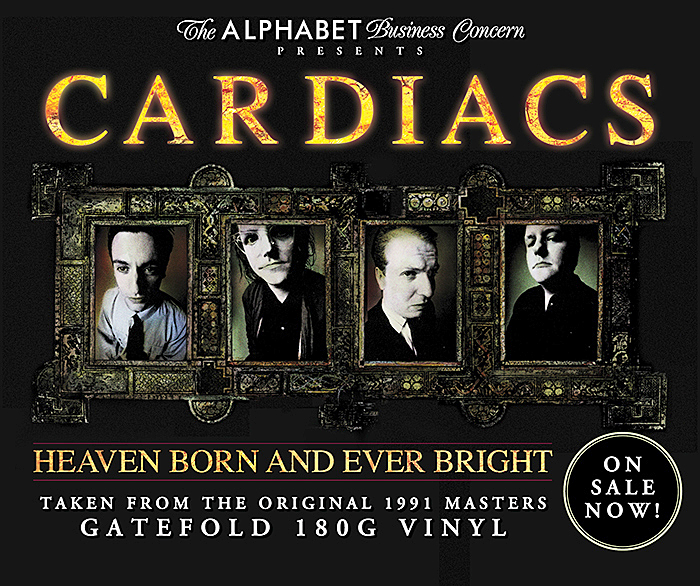 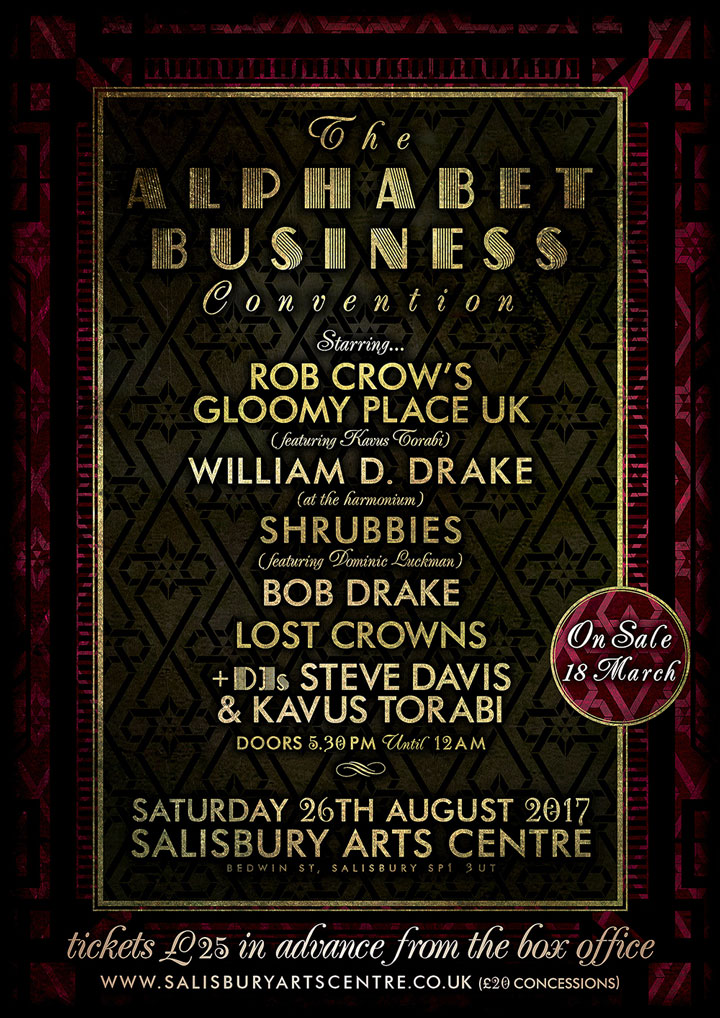 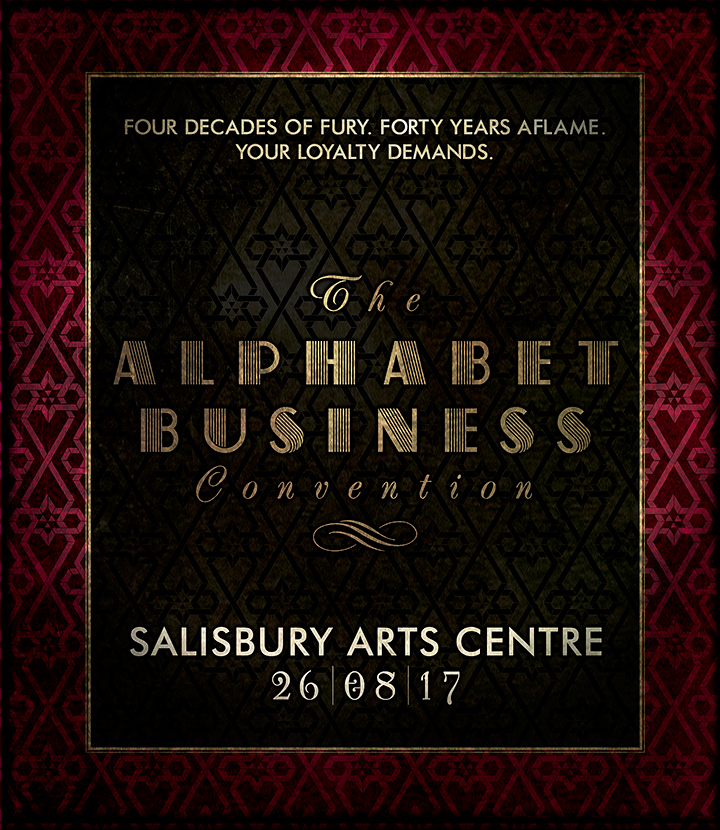 I am closing the shop from Friday at 10pm until February 1st so that I can get some other important Alphabet Business Concern projects completed. Rest assured, the shop WILL RE-OPEN on the date specified (I know you will be worrying). See you in February and thank you for being amazing customers throughout 2016. 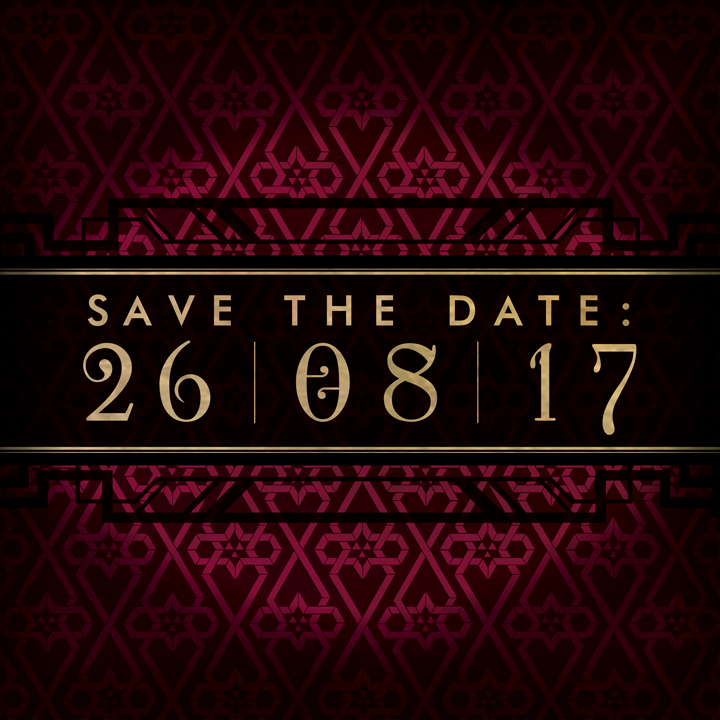 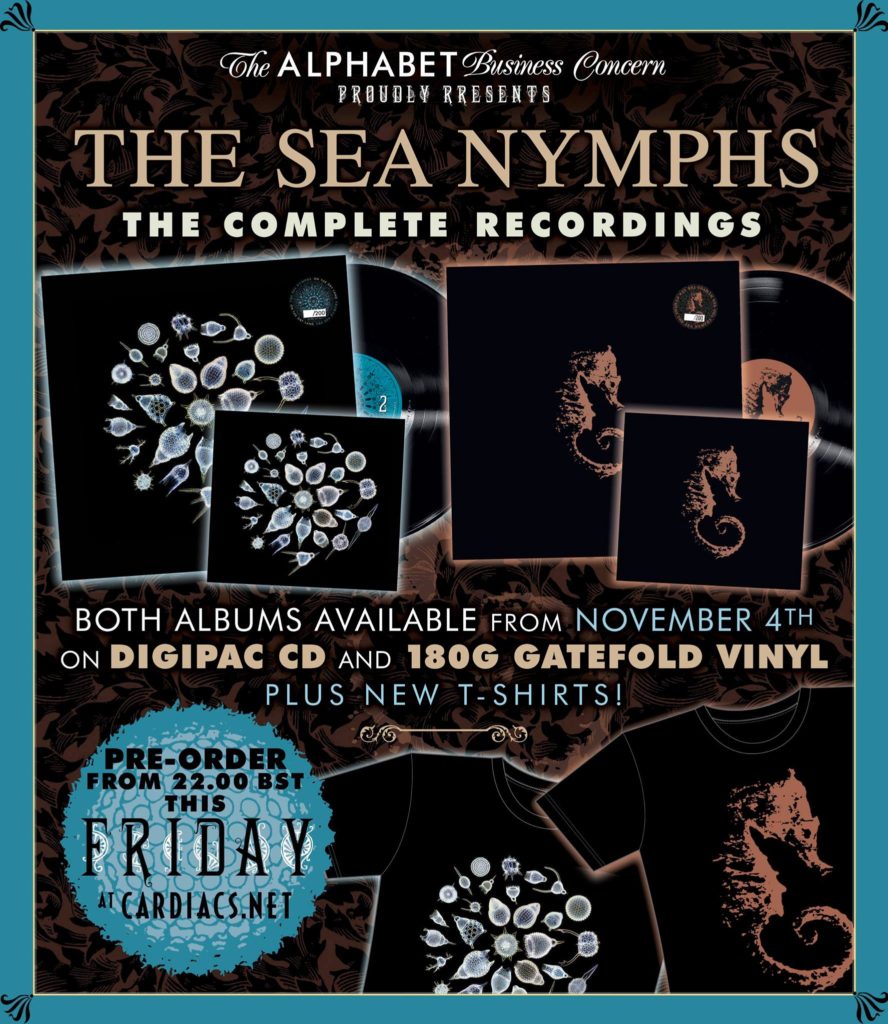 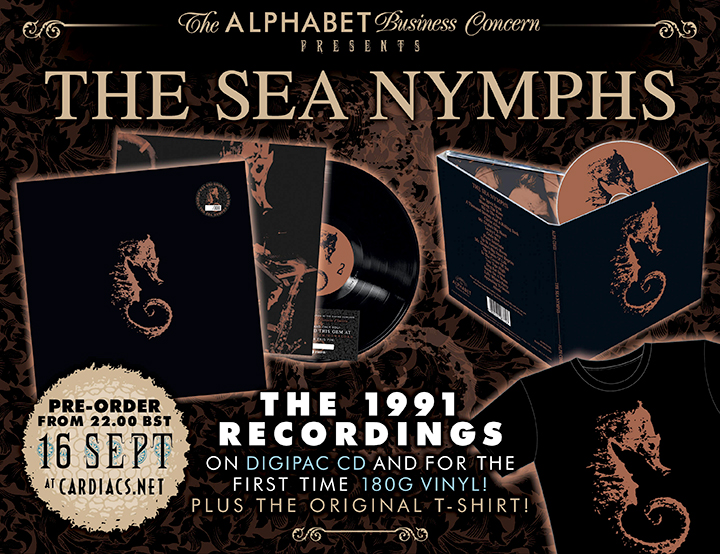 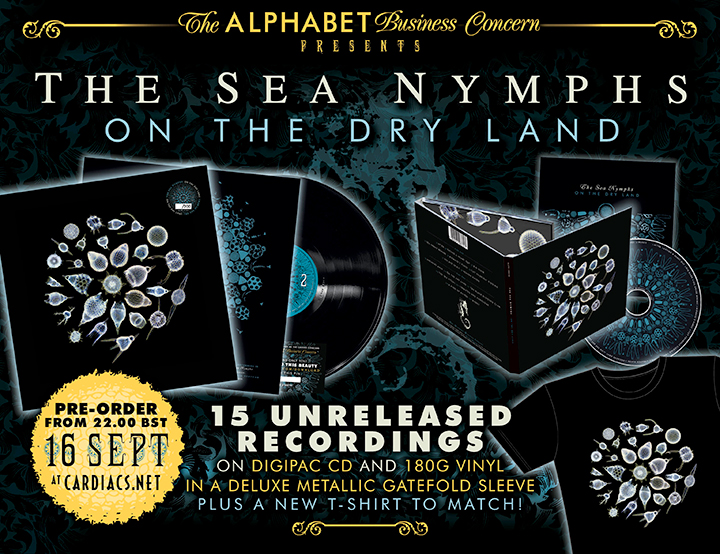 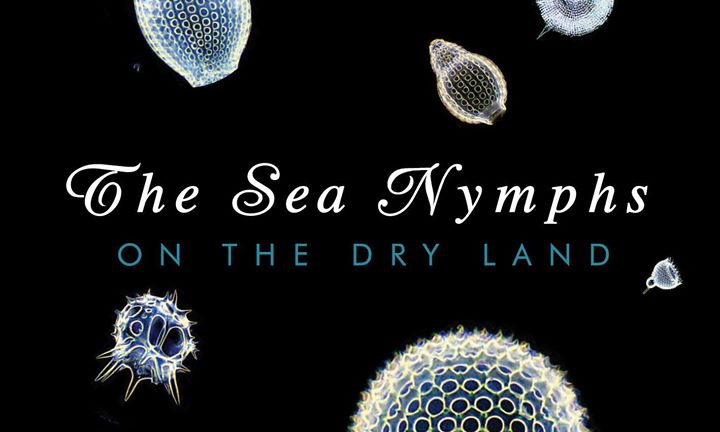 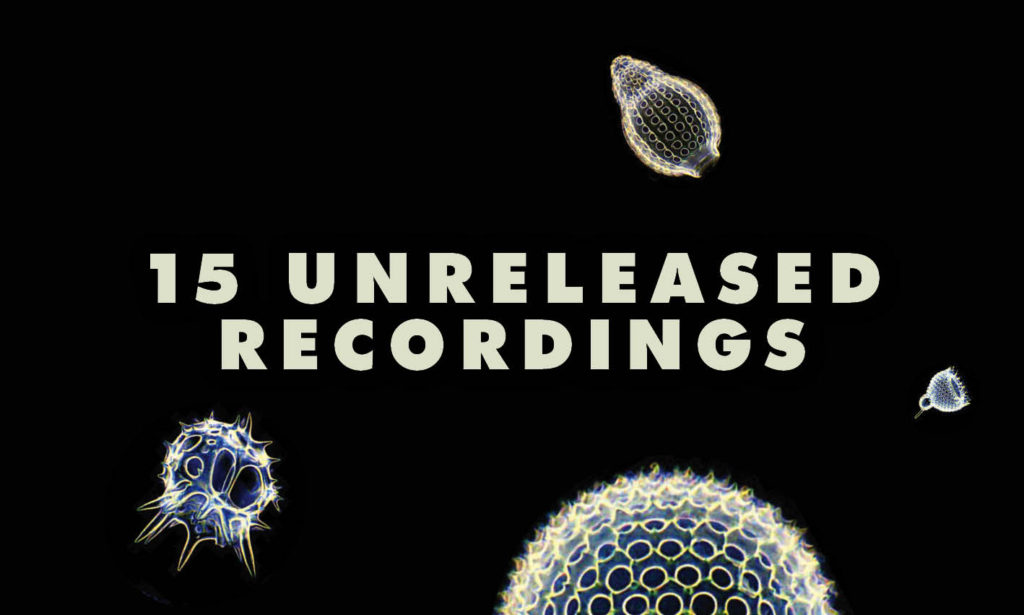 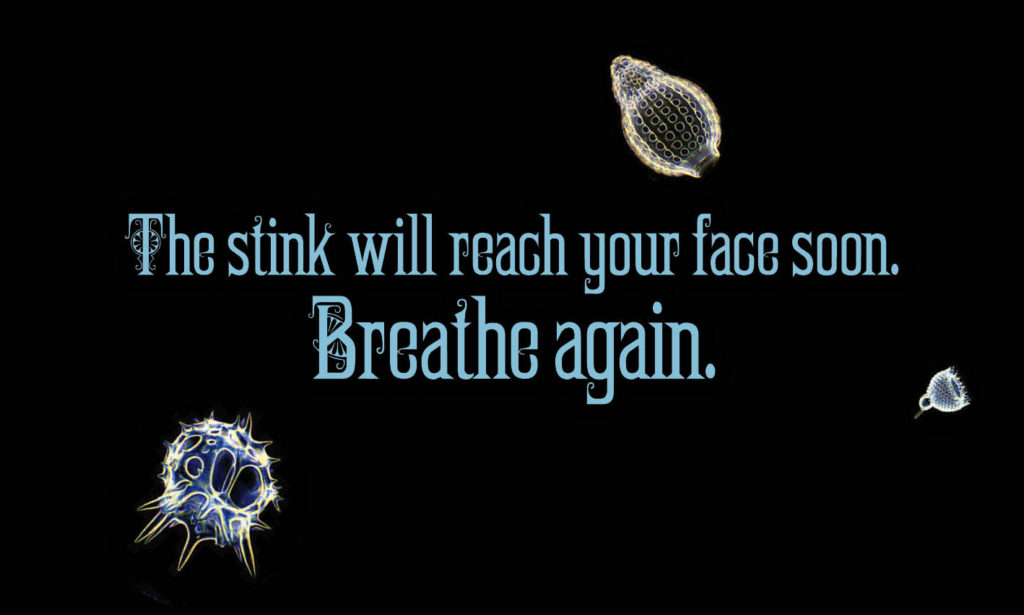 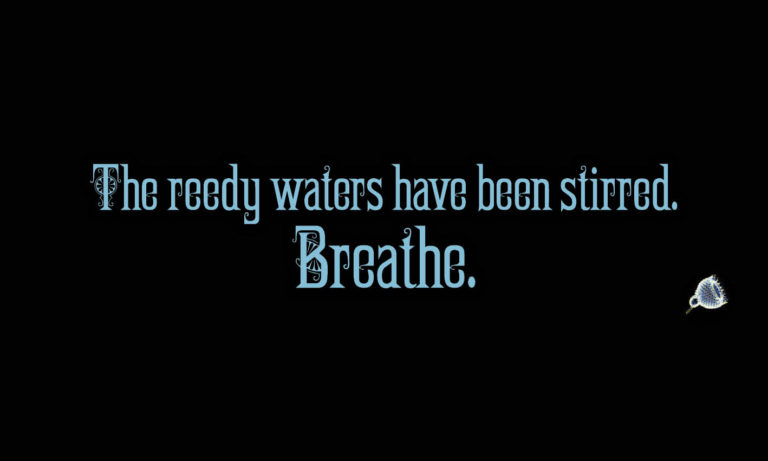 The Consultant’s Memorabilia Collection is moving premises. Shipping will be delayed as a result but rest assured your stuff will be shipped ASAP. All orders to date have been shipped today.

On Sunday 13th December at noon (BST), 60 more box sets will be available for purchase. There is a lot of interest so if you really want one, be there on time!

I’m sorry to report that shipping of The Seaside box set has been delayed by a maximum of ten days. The CD and LP are not affected and will be shipped from Monday 30th November. Please accept my apologies.

Tim continues to work hard at getting better and is receiving plenty of help to enable this. There are ups and downs but progress is being made all the time. He isn’t back at work yet but who knows what ideas are accumulating in his mind? There’s definitely something going on because he gets cockier by the day. He wanted me to tell you how grateful he is for your support and love and says he will send a personal message out to you all soon.

CD, LP and LP Box Set are available to pre-order from the shop now. Look how happy the news made them!

We must apologise for the generally retail-based news posted here and hope to bring you news from our leader soon. In the meantime, here is another retail-based banner for the exciting release of Guns on vinyl. Get into it! 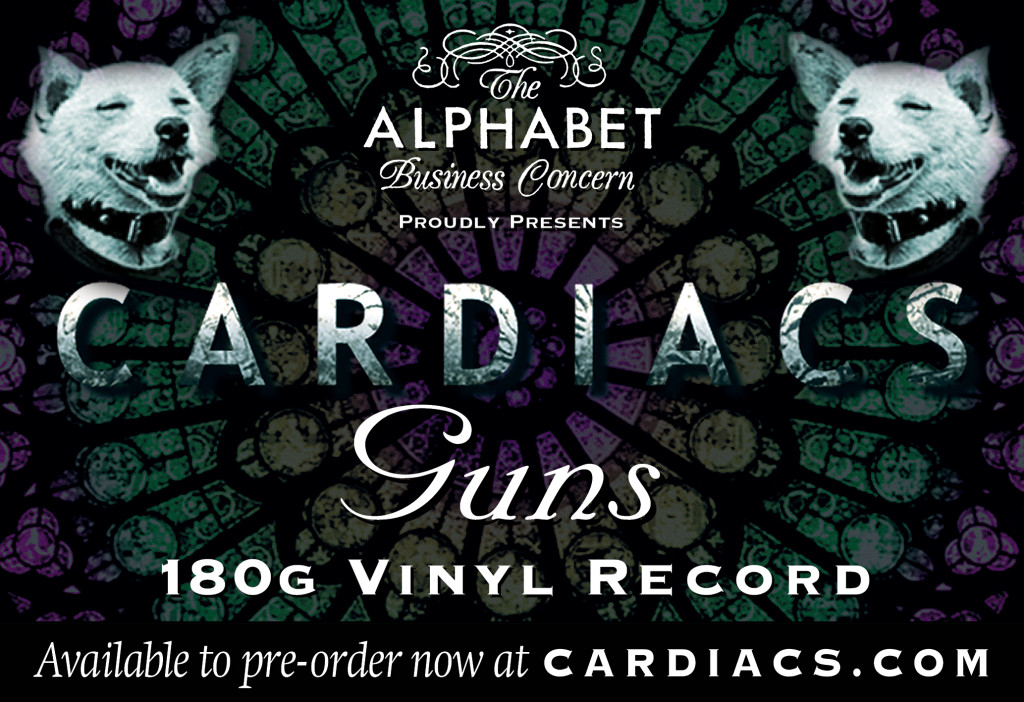 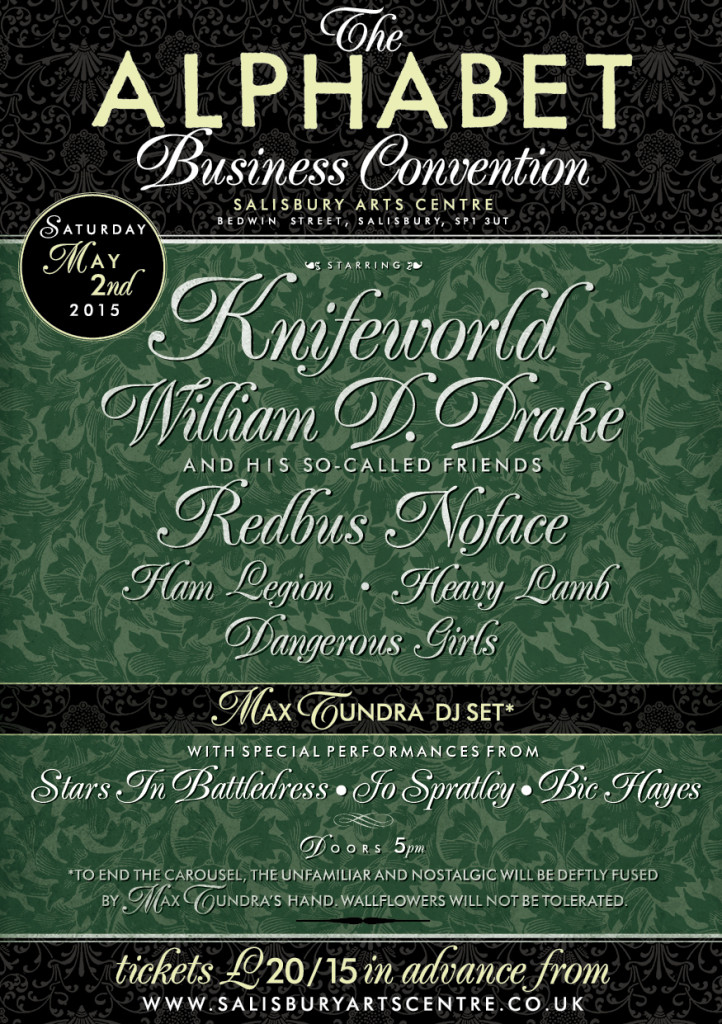 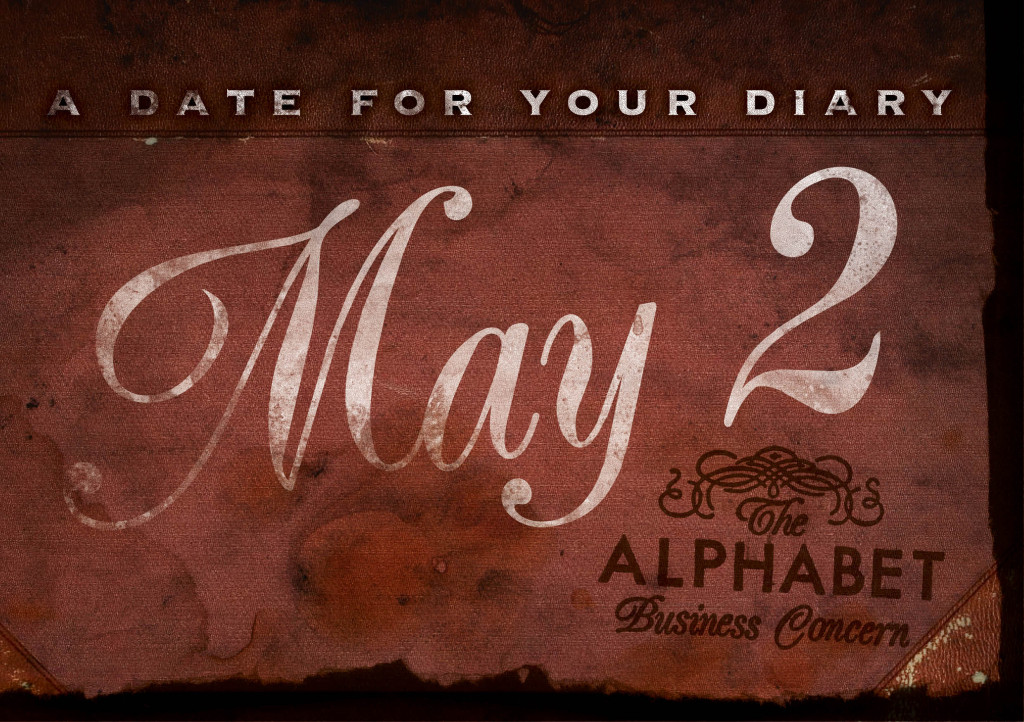 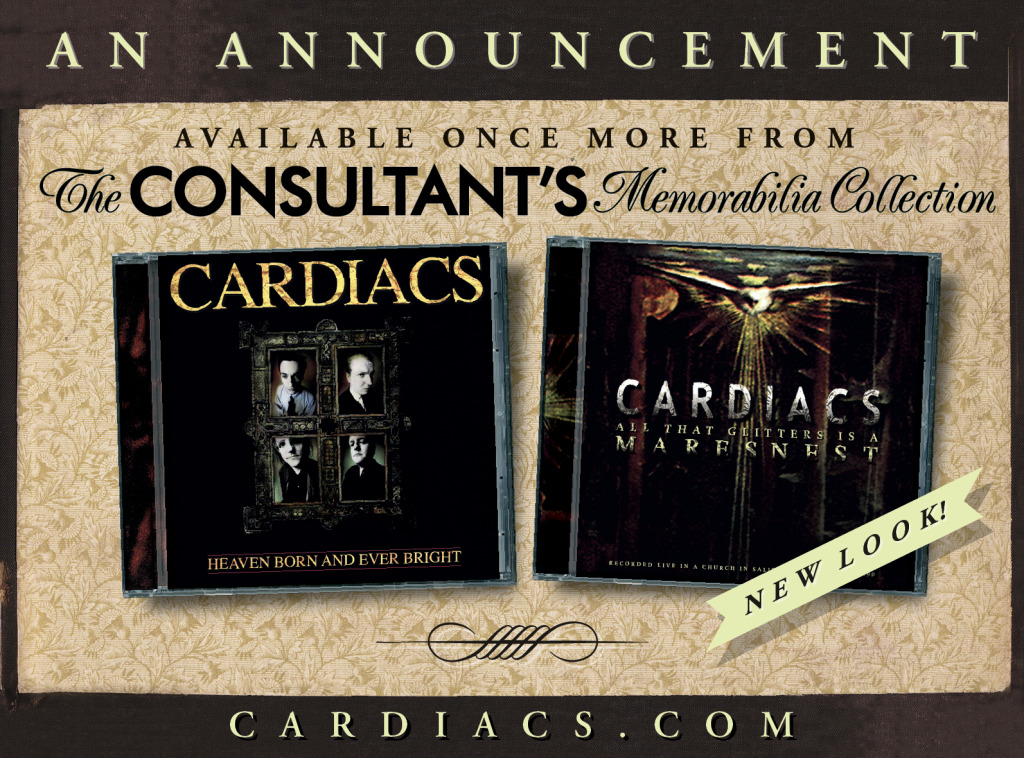 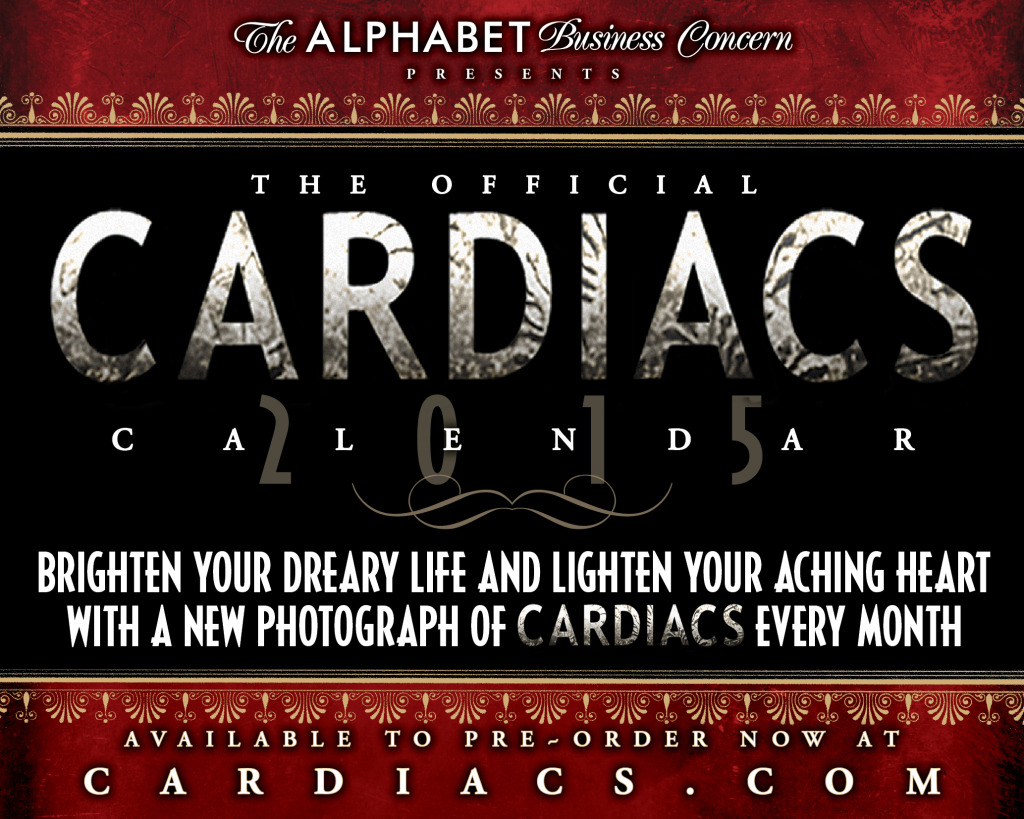 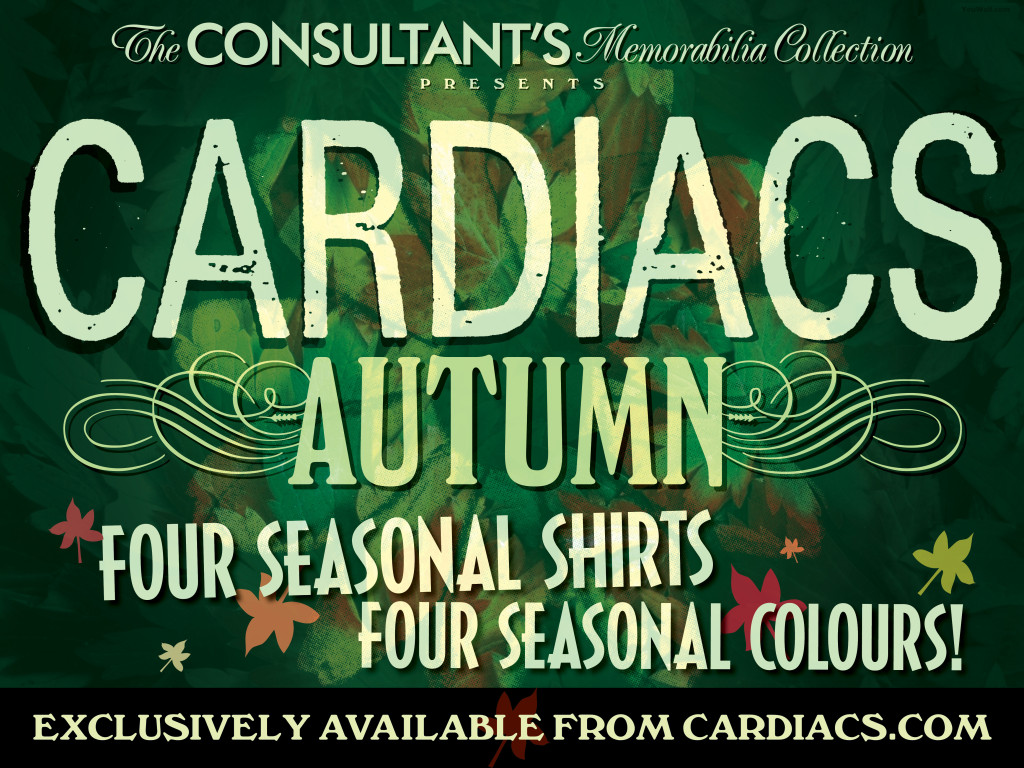 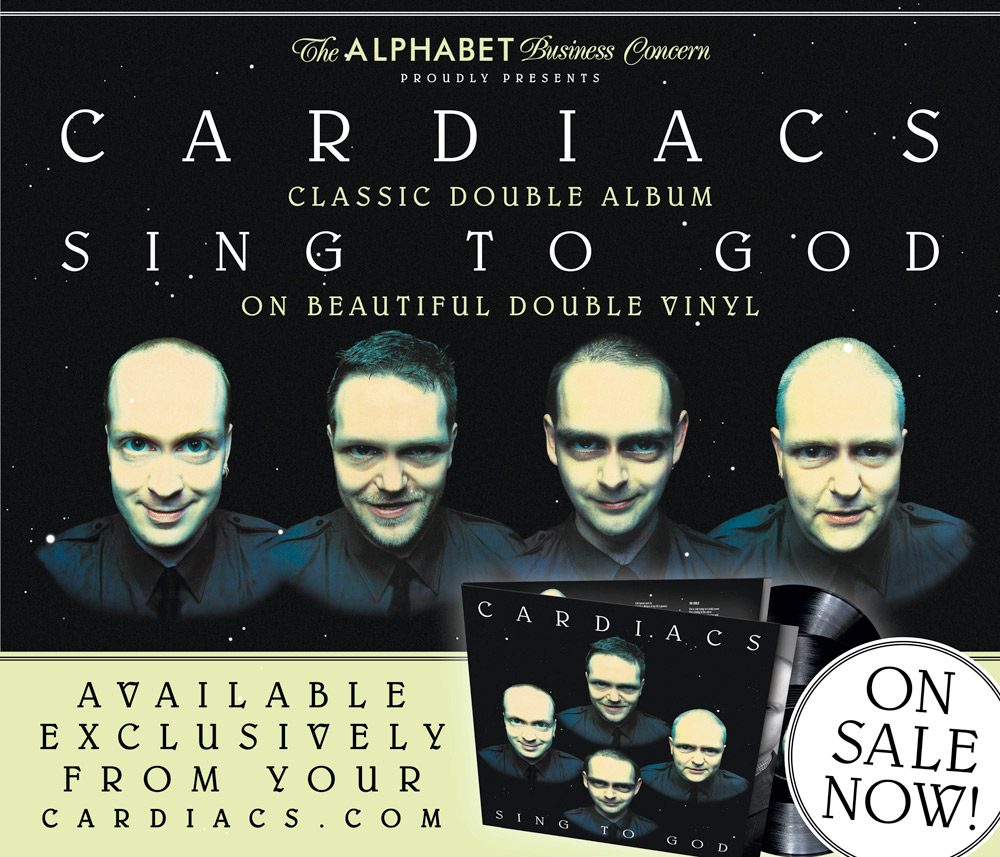 We have a winner! Well done David Minnick! 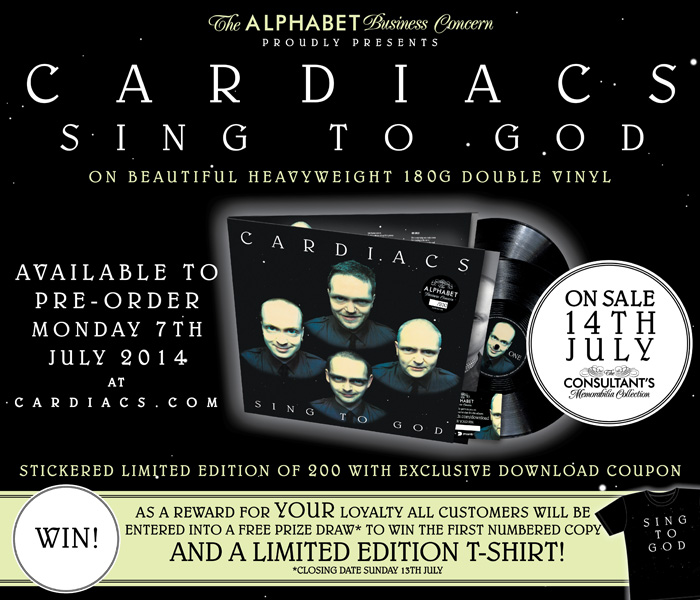 Please note that the STICKERED LIMITED EDITION were sold as quick as a flash but the regular edition is still available in the shop. 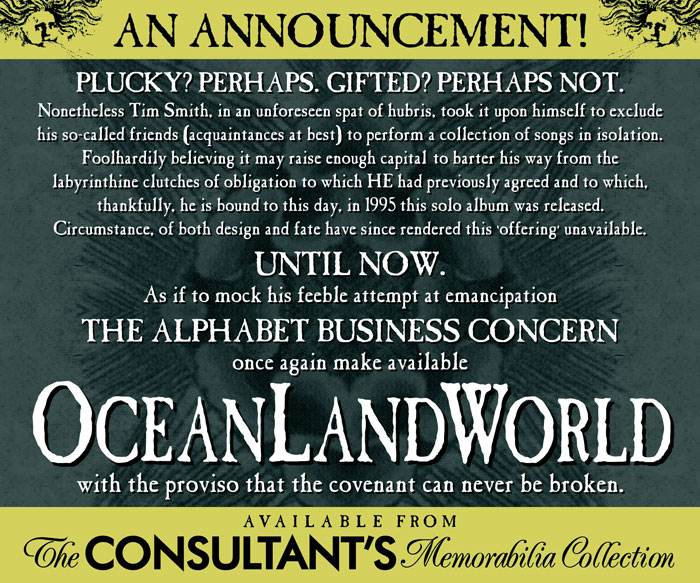 Did you know it was 25 years since Cardiacs released ‘On Land and in the Sea’? The Alphabet Business Concern is marking this momentous event with the sale of a commemorative t-shirt. It’s a lovely thing and I for one will be wearing mine all Summer to show my enduring love for the album and its creators. The Alphabet Business Concern has also invited a select few to a small anniversary party. The sandwiches will no doubt be old and the pop will have ceased to go bang. I hope they have a great time.

Turn up the volume! Open the windows! Sing along to Buds and Spawn in your loudest voice!

Good news! The Special Garage Concerts are now available in divine double digipac format. This lovingly crafted gem is on sale now at the Consultant’s Memorabilia Collection. Keep a look out for more exciting news over the next month or so: or when we decide to tell you stuff: or when we are just on a servile whim: or when we actually have something truly important to say: :::::

Finally, The Alphabet Business Concern has released its grip on some of the AME recordings. So, I am pleased to announce that Spratley’s Japs and Mr. and Mrs. Smith and Mr. Drake will be going on sale later today. Should we set a time? Alright, let’s say 6 pm sharp, shall we? Spring has sprung and then this happens…it’s as if there’s something in the air that’s saying ‘yes’.

As resident shopkeeper, I have been asked repeatedly about forthcoming releases and re-releases. Whilst I firmly believe that patience is a virtue, it has been decided that I should put you all out of your collective misery and give you the information you require. But I’m not going to. However, I will offer a snippet that will put many of you at ease. There ARE indeed plans to re-release The Extra Special Garage Concerts on double CD and, before this happens, there will be a limited number of Volumes I and II made available to purchase at the Consultant’s Memorabilia Collection. You will be notified in due course.

With respect and best wishes for a HAPPY NEW YEAR, 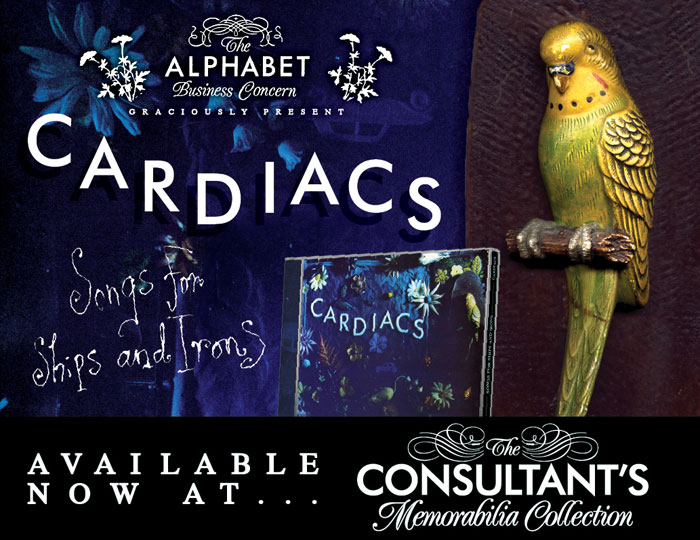 I have been overwhelmed by the loyalty displayed by you, manifest in your purchases at The Consultant’s Memorabilia Collection. THANK YOU to all of you! Now that the enormous backlog has been cleared, a more timely service will resume.  We will have some new and interesting things for you to buy soon…

There now follows an announcement from THE ALPHABET BUSINESS CONCERN

You will be delighted to hear that the ALPHABET BUSINESS CONCERN have seen fit to release MARESNEST on DVD in glorious region free, PAL 4:3 Format. It will be available from the on-line shop from Monday 2 September 2013.

Limited tickets are still available for Mr. Corbin’s Bumming Shed: A Day of Celebration for the Benefit of Tim Smith at Salisbury Arts Centre this coming Saturday. Activities include a Cardiacs pub quiz at the Five Bells at 1:30 pm, live music and an art exhibition by Sarah will commence at 5 pm. Exclusive merchandise will be for sale, too.

There now follows an announcement from THE ALPHABET BUSINESS CONCERN

The ABC wishes it to be known that Mary has been relegated to a seedy garage to perform her duties as ordinary shop girl. This is in response to her recent, flagrant allegiance to Mr. Tim Smith. Pictures to follow.

As we all know, Tim Smith managed to get himself into some serious trouble a while ago and hasn’t quite managed to get himself out of it. That appeared to be the sad demise of the Alphabet Business Concern and everything else therein. Now, however, there is a new plan: to move forward, to progress, to get things done…

So, I am charged with the task of re-launching the shop and I am happy to be performing my duty.

It may seem, upon first glance, that some of your favourite things are not on sale yet but do try to be patient with this and the arrival of your orders! Things are on order. Things will be presented for your purchasing pleasure as and when they arrive at headquarters. New things are going to be made to keep you all happy. And, of course, to keep him happy. That is why we are all here.

There now follows a special announcement from THE ALPHABET BUSINESS CONCERN

Tim continues to have health problems but recently a London-based consultant who specializes in working with musicians has begun working with him in an effort to restore greater freedom and movement.