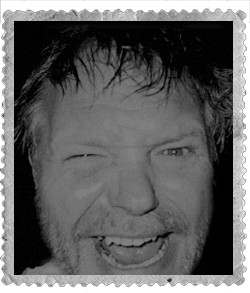 This is the story of a boy’s true love for a good and not rotten day and how that love was rejected. The boy is Tim Smith. Here’s how he suffered.

Tim lay in bed staring at the ceiling. The ceiling went “brow brow brow!”. He’d been trying to sleep for hours. But sleep was still far away. He sighed and turned over closing just one eye. His favourite eye. It didn’t work. Tim sat up. His head felt soft with insomnia. He had a long day of recording tomorrow and he knew lack of sleep would ruin his performance. The tiny bedside clock read 3am. The small hours seemed unfriendly and spat spiteful juice near to where his head juddered.

As he lay there Tim heard the distant slam of a car door followed by a silly kind of laughter. He frowned resenting the noise. He knew who it was, but WE won’t say who it was. “I know who YOU are!” Tim shouted into his pillow.

Unable to lay in bed any longer he got up and ran as fast as he could down the stairs. The whole house seemed to be watching and waiting. Nothing moved. The furniture looked dead. He hated that. “Dead furniture… what’s the point?”

He felt pain. A feeling of grief he hadn’t felt since he caught his tiny cock cock in his little zip zip when he was very small and a teacher had to unravel him.

“Why cant everything not pop about?” he asked himself again and again. “I want everything to lay down by the gate and then ask NICELY to come inside!” he coughed.

And so it went on…for days…