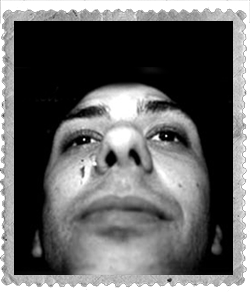 Blake Shakey and I were descending the slope and Blake assured me we would reach our destination within the hour. Blake and I had been inseparable for the three weeks, wherever I went Blake would follow. We were held up, by jealous peers, as a model of friendship, an example of two men bonded by a common passion for life and adventure, an equal companionship of pride and servitude. It would be true to say there were no two other men that abhorred each other in the way that Blake and I did.

“Your playing is sloppy and your posturing, a cliché ridden throwback to the bloated mentors of your childself” was how Blake introduced himself to me those long three weeks ago, and he had a point. “I’ll sort all THAT out,” he added. “It’s your fingers, they’re too long to be playing a guitar. You should have been a locksmith”

“Stop nodding your head like that when you play, it makes you look like a bad wanker”

A gruelling week in my room (which Blake had “appropriated” for the purpose of sleeping…I had to sleep on the floor with my head near the fireplace) followed and I had begun to take leave of my senses, waking up giddy and going to bed (the floor, with my head near the fireplace as I mentioned earlier) feeling noxious. Blake had brought with him an old rolled up, dust-impregnated carpet, which he would hit repeatedly with a broomstick every time I made what he perceived to be a mistake.

Being allergic to dust it made my nose red and eyes stream.

“You’re not doing it right”

Blake was not a musician, nor was he a pleasant looking man. Occasionally between snide remarks and put-downs he would toss epithets of wisdom at me.

“He who laughs last, Kavus, laughs loudest” “You can’t make an omelette, Kavus, without breaking some eggs”
This last pearl I took to be particularly useful, as I was at the time making him a rotten omelette.
“Come with me. It’s time for the descent”

He had promised, from the out, that the descent would make a reasonable player of me and more worthy an addition to the Cardiacs troupe. After waiting patiently outside the pub for a few hours, Blake emerged and announced he was ready and we began. It was getting dark. At the bottom of the slope he retrieved a rusty box out of the pond and had soon managed to encourage my hands into it, securing them with a length of rope that smelt like dogshit.

The nibbling and biting started then.

“I warned you about those long fingers of yours” he laughed, turning his back on me and beginning the ascent.

“But Blake!” I managed, “There’s creatures in there”