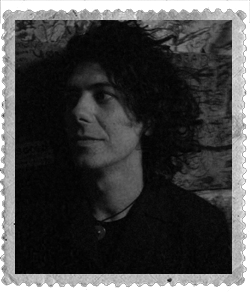 Too hot and exhausted, I was pushed harder into the seething throng and forced to confront my very real terrors. A prod in the back. “You think this is hot?” he leered, “It’s gonna be a lot hotter in Hell!” “And full of criminals”. The rolling of the eyes, the creasing of the brow as he lunged in closer for one final gurning revelation.
“The Devil wants to dance two-step on your smelly ass”

November: An invitation from ALPHABET, at my expense. Directions: Frustrating.

(Note: The two day journey to what I thought would be the ALPHABET HQ commenced the phase I now like to refer to as The Rattles).

O shit chagrin, it was all disappointment and wrong destiny when the secret location revealed it’s shape to me as Mr Corbin’s Bumming Shed. By now I had reached the sorry point of considering every friend a potential enemy in an arena of self-doubt.

“This is not the ALPHABET HQ!” I found myself wailing at the stinking rotten world of it (I had previously experienced Mr. Corbin’s shed on an occasion when I was weighed).
Inside I found the place not as I remembered it, but adorned instead with ragged strips of tinsel Upon the little table, underneath a note with my name spelt incorrectly (Carvis) I discovered a red, gold braided sash.
Cardiacs all burst in and then the horrific, relentless ticklings started.

After all this excitement I was reasonably beside myself. The lads sat me down and suggested I might buy an extremely expensive guitar if I wanted to play in my favourite band.
I felt the gammy leg of sobriety kick me into touch. Foolishly holocausting money I didn’t have on such a purchase.
I presented the lads with my instrument and they laughed at it and me so that it made me feel foolish.
The Lads say they’ve taken to me now and my new room is quite nice.
Becalmed by all that had happened I fell into a dreamless sleep, for the first time in months, awaking to find Babba wearing makeup.

The day I joined my fave band.