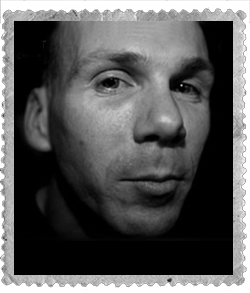 Babba invented a game called “Punctures” on the bus one night between concerts.

All of Cardiacs played the game on Jim – a riotous success. Jane, who is the shop girl, smirked and started to clap her hands. Babba turned out to be the Puncture Brigadier after the first game, probably because he had a more lucid understanding of the rules at that stage. It’s not always clear who the definite winner of Punctures is, nor is there a particularly concrete scoring system. David Murder thought the game was bland and went to the front of the bus to talk to the driver about his mate Yowen and wires. After the game was over Jim shuffled back to his bunk while Jon Daniel rubbed his legs and sang “Enpunctured! Enpunctured!”

Discussing the game the following day Tim observed “It’s good, because the more the punctures pop, the more you want to puncture.”

To the left of the roadside was an expanse of not altogether ugly land resembling something between a landfill site and grazing pasture. Littered between “white goods” and perambulators whose occupants had long since grown up was a tea-crate rattling forlornly.
Cardiacs’ caretaker, Captain Jon whistled something about wanting to film it on his Super 8 camera and made his way past the debris to where the tea-crate, mournfully creaking, lay.

Watching from the bus, Cardiacs grew quickly tired of Captain’s aborted attempts to remove his Super 8 camera from its case. Moments later they had circled the tea-crate and at Babba’s insistence were playing a game of Punctures on it.

Distracted, Captain Jon looked up from his fumblings to witness Babba with a nosebleed struggling to prise the lid off the tea-crate while Jim, unbuttoning his trousers began to squat over a shopping cart behind Tim and big Jon Daniel, who were attempting to restrain an increasingly excitable Kavus. Babba held the now removed lid and was peering all bloody-nosed and silent into the tea-crate. Captain Jon had finally freed his Super 8 camera from its case and was clutching it in his shaky hands. Cardiacs displayed the contents of the tea-crate to a defeated Captain Jon who returned his Super 8 camera to its case muttering to himself “I think they’re all barmy.”